Cerenkov radiation is a well-known phenomenon, in which optical photons are emitted when a charged particle moves faster than the speed of light in a medium. We propose and demonstrate a method, based on the detection of Cerenkov radiation, to noninvasively image beta-emitting radionuclides inside small animals. This imaging method is referred to as Cerenkov Luminescence Imaging (CLI). At present, there is no sensitive in vivo imaging method for monitoring the biodistribution of β- emitting radionuclides used for radioimmunotherapy or other therapeutic treatments for cancer. CLI will allow in vivo imaging of the biodistribution of these radionuclides, such as Y-90 (end point energy 2.28 MeV, half life of 2.67 days) with high sensitivity. It can also be used as a low cost alternative to PET imaging for β+ emitting radionuclides.

We have successfully detected Cerenkov light from F-18 and Y-90 in small animals using reasonable injected doses of ~200 µCi. An ex vivo mouse study using Y-90 where a capillary tube with 274 µCi of Y-90 was inserted down the esophagus is shown in the figure. The number of photons detected in the bare capillary tube was ~7×106 photons/s/cm2/sr. In vivo, 1.9×104 and 2.3×105 photons/s/cm2/sr was detected from the dorsal and ventral sides, respectively. Based on GEANT4 Monte Carlo calculations for Y-90, we expect to observe ~70 visible light photons per decay. Currently, we are characterizing the intensity and optical emission spectra of Cerenkov radiation at different depths using tissue and agar phantoms. By measuring the emitted light from several views of the mouse, it is possible to reconstruct 3D images of the Cerenkov light distribution using analogous techniques to those used for bioluminescence tomography. 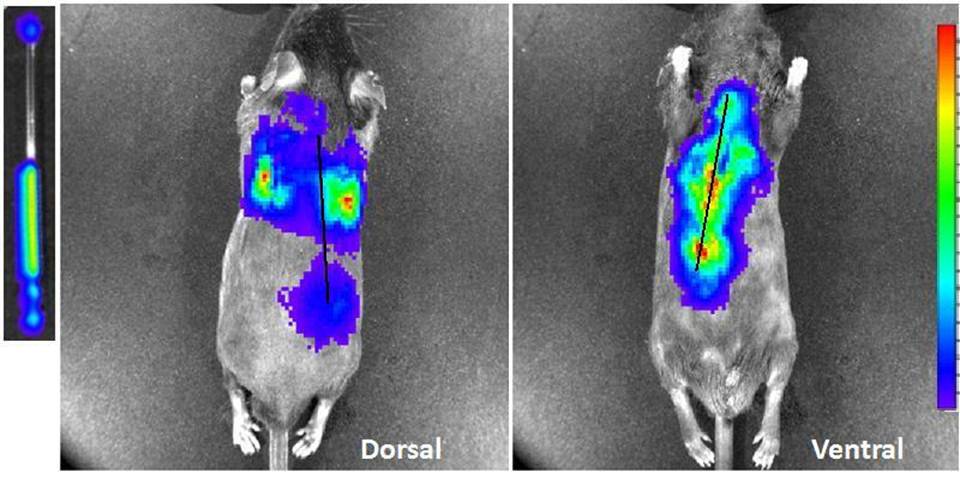